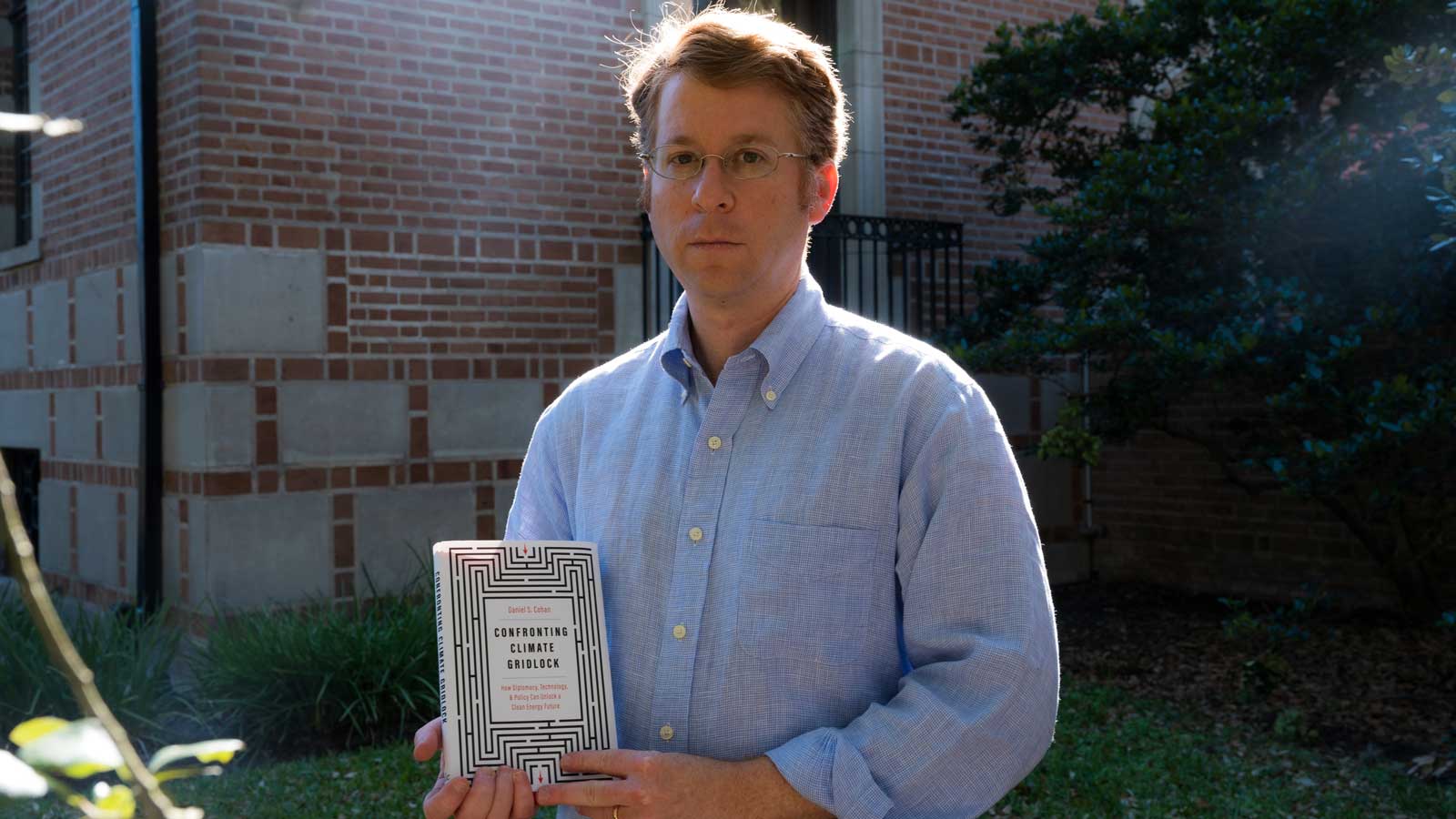 For 16 years, Daniel Cohan has taught such courses at Rice as “Energy and the Environment” and “Solving the Climate Challenge.”

During that time, the associate professor of civil and environmental engineering (CEE) has published more than 50 scholarly papers and, starting about five years ago, dozens of columns and op-eds for such outlets as The Hill, The Conversation and the Houston Chronicle. The subject has remained consistent: global warming and what can be done about it.

“The problem was becoming ever more urgent and it was becoming personal. My book was born in the eye of a hurricane — several, in fact,” said Cohan, who lost electricity on his birthday in 2008 when Hurricane Ike hit Houston.

For Cohan, the next logical step was a larger, more comprehensive look at global warming, its causes and solutions, and that meant a book. On March 29, Yale University Press will publish Cohan’s Confronting Climate Gridlock: How Diplomacy, Technology, and Policy Can Unlock a Clean Energy Future. The book is now available for preorder.

“I’ve never done anything in my career from which I’ve learned as much as researching and writing this book. I was asking questions that couldn’t be answered in 700-word op-eds,” said Cohan, who interviewed more than 100 people while writing it, including scientists, economists, scholars of international relations and alternative-energy entrepreneurs.

Cohan took a sabbatical in the fall of 2018 to begin work on the book. His original choice of title was Climate of Opportunities. The “unlocking” cited in the book’s subtitle, in Cohan’s view, calls for a three-front approach: diplomacy (international actions by states), technology and policy (actions in the U.S. by states and the private sector).

He now believes it will be possible to “shift the grid” from its present fossil-fuel base to wind and solar, which together will form the eventual “backbone of a clean electricity grid.”

Cohan realizes even he was “too wedded to preconceived notions.” The nuclear energy and carbon-capture options can no longer be counted on to reverse ongoing trends as they seemed just a few years ago.

“Solar power was unimaginatively expensive when I was starting out. Electric cars? They were little more than a dream. Then came Tesla. They won the race. I think we’re also on the cusp of geothermal becoming cheap. I’m encouraged that Rice has pledged to be strictly carbon neutral by 2030,” Cohan said.

Cohan, 45, performed his first research into global warming as a middle-school student in Dallas. “That’s when I started to realize that, yes, the world is warming and, yes, we are the cause,” he said. That longtime realization lead to him earning a Ph.D. in atmospheric sciences in 2004 from Georgia Tech, and joining the Rice faculty two years later.

Cohan is already outlining his next book. Here’s how he concludes the first one:

“Time is of the essence. The longer it takes the world to reach net zero, the hotter our climate will become. The United States has a pivotal role to play in that pursuit. We are already too late to avert substantial warming, and perhaps even to hold warming below 1.5°C . But with concerted and consistent efforts, we can indeed confront climate gridlock, unlock a clean energy future, and help our children and grandchildren inherit a more hospitable Earth.”